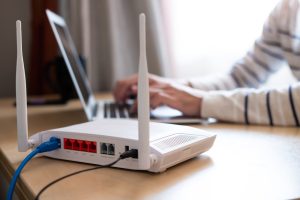 And too often, this happens at the worst times, like when you’ve finally gotten a moment to binge that show everyone is always harping on about! For some of us, though, slower internet speeds and poor streaming are regular occurrences.

We get the frustration. Just because you have the fast and reliable Fiber Internet we provide, there can be many reasons why you still get slower speeds and poorer performance.

Below we discuss some of the sneaky suspects that slow down your speed and recommend ways to improve it.

We discuss the problem of continuing to use outdated technology. We then go through the next most common issue: WiFi router placement and two kinds of interference that can cause slowdowns, physical interference and signal interference.

Let’s start with the most common culprit for Wi-Fi problems and slower internet speeds: an out dated router.

Everyone knows technology changes quickly. But most of us don’t upgrade that technology yearly, including our WiFi routers. So while many people get a new smartphone or tablet every couple of years, too many of us have not upgraded our WiFi routers to keep up.

Newer WiFi routers, especially those made after 2019, can handle and disperse much higher internet speeds than older models. Specifically, be sure to look for routers that utilize at least 802.11ac technology, more commonly called Wireless AC or WiFi 5.

Better yet, the latest Wi-Fi technology is called 802.11ax, or WiFi 6. This upgraded equipment can greatly increase internet performance and capacity, allowing WiFi speeds to exceed one gigabit or more per second. However, as you will see below, newer equipment is not the only thing that matters!

Poor WiFi router placement is one of the most common problems that plague homes with slow internet.

To begin with, it’s important to remember that WiFi disperses its signal both horizontally and vertically (straight ahead and up and down).

Objects that are physically “in the way” of that signal can interfere with the quality and strength of the Wi-Fi signal before it reaches your devices. Below are the most common physical interferences in many homes that lead to slow internet speeds.

One of the biggest slow internet speed culprits is glass and windows.

Glass and windows can cause significant interference. Avoid WiFi router placement too close to windows or other glass, as that can “deplete” too much signal and waste precious internet speed your smart TV needs to stream your favorite content.

Fireplaces, wall units, cabinets and similar obstructions will interfere with the WiFi signal. Reinforced concrete, which some walls in your home may consist of, is a particularly obstructing material. With this in mind, choose your WiFi router’s location, and try to minimize interference with these sneaky speed-stealing objects.

Televisions and Other Electronic Equipment

A TV is another typical problem for Wi-Fi.

In many homes the WiFi router is located near the television; and perhaps behind it so it’s hidden from view.  This is a big no-no, as your television is loaded with electronic equipment that blocks Wi-Fi signal and its ability to spread throughout your home.

Do your best to give your router as wide a berth as possible from your television and other electronics-heavy equipment like receivers and DVD players.

Beyond the physical objects that interfere with Wi-Fi, other items in your home put off signals that can cause slower internet speeds, too. Three of the most common are highlighted below, and you should take care when placing your WiFi router too closely to any of them.

In many homes, the WiFi router is in the kitchen. And it’s likely your microwave oven is slowing down your Wi-Fi.

Microwaves operate at the same frequency as many Wi-Fi routers—2.4GHz. That means that microwaves can interfere with WiFi signal. Provide your router with as much distance from your microwave as possible, and consider relocating it out from the kitchen if the interference continues.

You should also know that Bluetooth devices can obstruct WiFi signals and slow down internet speeds as they “hop” around different frequencies.

There may be many more Bluetooth devices active in your home than the common ones you’re probably thinking of, such as your smartphone and tablet. A Bluetooth mouse, ear buds, speakers and even toothbrushes are typical in nearly every home. So be mindful of using too many Bluetooth devices simultaneously if your internet speeds are slow.

This one surprises many people, but baby monitors and similar devices that transmit sound waves over a distance can interfere with WiFi!

Like microwave ovens, baby monitors and walkie-talkies operate on the same frequency as WiFi. Try to be careful where you place baby monitors in the house, or consider moving your router if the interference persists.

When you upgrade your Wi-Fi router to the latest, higher-speed capacity technology and wisely locate it, you can significantly improve your internet speeds.

But don’t forget that appliances, devices and equipment cause slowdowns, too! Doing so will make your streaming and browsing experience much more satisfying.