Roblox: What Parents Need to Know

Roblox: What Parents Need to Know 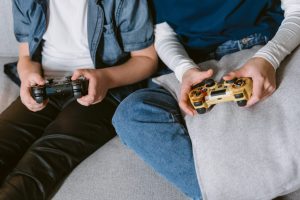 [10/4/2022] Besides streaming entertainment and spending time on social media, it’s a good bet that gaming is one of your child’s favorite online pastimes. And thousands of different online games are available for them to enjoy.

It’s also likely that you’ve heard one particular “game” repeatedly mentioned more recently: Roblox. And if your kid happens to be obsessed with it, Roblox may be about all you hear them talk about!

While not as well known as Minecraft, at least until the last several years, Roblox pre-dates Minecraft, having launched in 2006. But since the late 2010s, Roblox’s popularity has exploded.

Though Roblox is just one online game your child can play on DayStarr’s Fiber Network, we think it’s worthy of your attention. And before you think that learning more about Roblox isn’t worth it, consider this: over half of all children under 16 played Roblox in 2020 alone, a truly astounding statistic. And as recently as May 2022, 43 million people played it daily.

Read below to learn more about Roblox and some key features as we answer many parents’ questions about this online gaming phenomenon.

What Exactly Is Roblox, Anyway?

So first and foremost, technically speaking, Roblox is not a game itself. With an accompanying eye roll, there is a good chance your kid has already told you as much.

Rather, Roblox is a gaming platform. It’s an online place to create, develop, and share games and then play them.

Your child may develop a game when they are “playing” Roblox—and then play the game they built. Or they could play a game created by one of their friends or other players. Hence, Roblox’s platform has a creative and educational aspect that can yield benefits in ways other “games” may not.

Millions of Roblox games have been invented. Many of them are played every single day on the Roblox platform. From first-person shooters to pet adoption and caring-for games, to traditional treasure-seeking adventures, just about any game style can be found on Roblox.

Are There Costs and Monetization Involved in Roblox?

Technically, Roblox is free. There is no fee to join Roblox’s platform and games are free to play.

However, like many “free” online games, there are “in-app purchases” available to customize and improve the play of a game—and your kids may come begging you to let them make such purchases.

Additionally, there are ads in the game, so your children will be exposed to marketing materials. Also, keep in mind that many of these ads are clickable, taking your kids from the Roblox platform to a site outside the platform.

Roblox includes messaging and chat features to enable interaction with other players in the games played on its platform. Remember that Roblox’s popularity extends beyond just kids; many adults can’t stop playing.

In theory, your child could interact not only with other kids their age but with grown-ups as well. Naturally, some parents are concerned about inappropriate conduct and communications of any kind, and Roblox has taken steps to address these concerns. They’ve even included a page on its website to help parents understand Roblox’s safety measures.

Roblox has robust parental controls, especially for children under 12. For example, parents can prohibit any “friends” and contacts from messaging their child, which may give some parents extra peace of mind. Other features include chat filters (to detect inappropriate communications or conduct) and an impressive reporting system.

Given Roblox’s wild popularity, parents and kids will likely encounter it at some point. Parents should exercise caution and maintain a general awareness of their child’s internet use (as with any online activity). But there is an educational, or maybe even vocational, value to Roblox. So take some time to engage with your kid’s experience on Roblox, and who knows—maybe you’ll join in the fun, too!