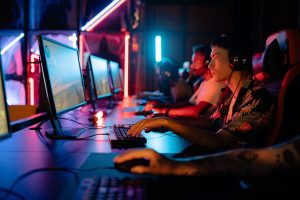 [9/6/2022] Esports are on the rise—and it’s no longer just the domain of digitally savvy teenagers or young professionals.

Esports—short for “electronic sports”—takes the hobby of online gaming against friends and transforms it into a competitive sport.

Esports even has spectators, complete with leagues, analysis, commentators, and organized fans!

The rise of esports is a made possible by faster and more reliable internet, like the internet available in your community through us at DayStarr and our cutting-edge fiber technology.

And through Fiber Internet, gamers can compete in esports games and tournaments, and spectators can enjoy cheering on their favorite esports gamers and teams with pristine streaming quality.

We’ll discuss the growth of esports worldwide and why it’s time to start taking esports seriously. And we highlight how esports is providing outstanding opportunities for economic growth and career development, too.

Global Viewership of Esports is On the Rise

But Americans aren’t the only people captivated by esports. Its popularity extends across the world, from Asia to Europe. And its viewership has been growing exponentially every year.

Recent market research indicates the audience for esports will expand to over 530 million people worldwide by the end of 2022.

It’s not just gamers and spectators who notice esports’ potential. Businesses and financial investors are watching closely and putting substantial funding into esports platforms and infrastructure.

In early 2022, the owner of the Washington Wizards basketball and Washington Capitals hockey teams announced his company was investing millions of dollars in building a 14,000-square-foot esports live-event-and-entertainment center right located by Capital One Arena in downtown Washington, DC.

Such investments are increasing the profile and prestige of competitive esports and attracting more attention from the business community.

As a highly technical field, esports requires many seasoned and talented professionals to create the industry’s magic.

However, esports’ economic impact extends well beyond the design and execution of the games.

There is an entire market devoted to esports. Esports have dedicated websites and news reporters, which have multiplied recently. And as esports are popular worldwide, translators familiar with the nuances of esports jargon will be in demand. Plus, there are plenty of opportunities in advertising and merchandising.

Even local communities benefit economically from esports. Small businesses profit from the economic growth associated with esports spectators, who can enjoy local restaurants, food, and other venues, especially during tournaments.

With the advent of esports, competitive high school sports have moved well beyond the most common team games like football, basketball, soccer, and baseball. And high school level esports teams, even high school leagues, are buzzing with action—and growing by the year.

The High School Esports League is America’s largest organization for high school esports and partners with more than 2,100 schools across the country to help facilitate competitive esports at the high school level.

Of course, esports extend beyond the high school level, too, and college-level esports are thriving on campuses across America.

And just like the numerous Top Ten lists ubiquitous during the college search, there are even college rankings for esports competitors to consider and academic programs that develop and promote the esports industry.

There’s even a collegiate esports association, the National Association of Collegiate Esports (NACE). Currently, 175 colleges and universities in America offer varsity esports programs recognized by NACE. In addition, scholarships are often offered for both varsity and junior varsity programs, which help further cultivate and nurture talent.

There is over $16 million in collegiate scholarship money available to esports gamers, with some scholarships worth thousands of dollars per student. That kind of financial support can make an enormous difference for many families and even decide whether a promising student can attend college.

Esports teams and players—whether pro, amateur, or student-athlete—all need reliable Internet to compete and win. Reliable Fiber Internet, such as the DayStarr Fiber, is faster than cable internet because it transmits internet through light.

Fiber internet can transmit data for gaming and other applications 20 or even 30 times faster than traditional copper-based cable internet.

As any esports competitor will tell you, those speeds and a reliable connection are essential to the esports community and industry—and to rack up wins that make national and global champions.