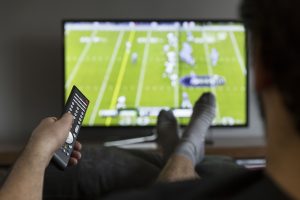 [9/28/2021] Not long ago, football fans had to keep cable just to watch their favorite teams—but not anymore. You can now access all your favorite sports content by subscribing to a live TV streaming service instead.

But how do you know which service is right for you? Start by taking stock of your priorities, like the days and times you prefer to watch, the content you want to access, and your anticipated budget. You may need more than one streaming platform to catch every game this year.

The NFL Network, FOX, and Amazon Prime Video all stream Thursday Night Football. CBS and FOX air on Sunday afternoons, while NBC airs on Sunday nights. You can catch Monday Night Football on ESPN. And during last year’s playoffs, game broadcasts were split between ESPN, NBC, FOX, and CBS. Preseason games are not aired nationally, so if you’re a hardcore fan, you’ll have to view those games on your area’s local networks.

With those schedules in mind, here are our top three streaming service picks for viewing football this season.

With packages starting from $65 a month, FuboTV can be a little pricey for some… but keep in mind that this includes a range of cable TV channels, not just the ones that broadcast football. With Fubo, you can catch every NFL game in the 2021 season, along with a variety of other sports throughout the year. The basic package includes the NFL Network, but you’ll have to pay an extra $11/month for RedZone access.

A Hulu Live TV subscription gets you unlimited access to all NFL games, local and national. Its $65/month package includes access to the NFL Network, plus extra NFL content (like preseason games, interviews, and studio shows) all year round. For an extra $10/month, you can add RedZone to your Hulu package.

This is the crème de la crème of football streaming, making it a no-brainer choice for many NFL fans. For a flat fee of $100 annually, you can access every single NFL game, all RedZone content, NFL originals and programs, and a comprehensive collection of games available on demand. You can also stream from multiple devices at the same time. If you’re a diehard football fan, this may be just the thing you’re looking for.

The Future of Football

We’ve seen a lot of changes in how fans watch their favorite teams over the last few years, and there are even more changes on the horizon. The 2023 season will mark the start date of a ten-year-long renegotiated broadcasting contract. This means that Super Bowl coverage will be on a rotating schedule of host stations, and the NFL has rights to broadcast certain exclusive games, among other changes.

While the reformatting may be confusing, there’s also good news for streaming services. The renegotiated contract shows the NFL’s willingness to collaborate with streaming services. Prime Video, ESPN+, Peacock, and Paramount+ are already lined up to stream NFL games in 2022 and 2023, while Amazon, Disney, and Apple are eagerly waiting to snap up the NFL Sunday Ticket broadcasting rights currently held by DirecTV.

However, and whenever you like to watch, you’ll certainly need reliable high-speed internet to enjoy the great American game. At DayStarr Communications we’re proud to bring the speed you need to stream every nail-biting, heart-racing, cheer-inducing moment!