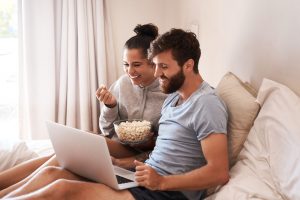 Ready to boost your internet speed with DayStarr Fiber, if you haven’t already, and leave video buffering behind for good? It will open up a whole new world of streaming possibilities that can complement your existing cable package or let you cut the cord entirely.

But which streaming set-up is right for you? The many choices can be daunting. Read on to create a custom streaming portfolio.

Netflix: The gold standard for those who love movies

Netflix, a pioneer in made-for-streaming television, has managed to hang onto its throne and is well worth the $9 to $17 you’ll pay monthly. Many streamers believe that no setup would be complete without this staple. Why?

In recent years, the streaming giant has put an increasing emphasis on original programming — and it has paid off, resulting in some of the most celebrated, original content. The service now boasts more than 100 original movies and shows along with a streaming catalog that would literally take years to view in its entirety.

No matter what genres you’re into, Netflix has you covered, from episodic shows like Ozark, Stranger Things and Orange is the New Black to riveting documentaries like Tiger King, Unsolved Mysteries and Lennox Hill to original movies including The Irishman and The Two Popes.

There are, of course, pluses and minuses to Netflix:

Thumbs up: Netflix supports HDR video, streams in 4K and its content can be watched offline on mobile devices. So you can finish that show you started last night on your commute to work.

Hulu: For the budget-conscious streamer who binges TV shows

That’s not to say that Netflix is for everyone. A budget-conscious alternative is Hulu with prices starting at $6 per month. Hulu’s niche is offering full season and day-after access to a long list of shows you won’t find elsewhere, including Family Guy, ER and Seinfeld.

And to a lesser degree than Netflix, Hulu has created award-winning content, including The Handmaid’s Tale and the documentary, The Beatles: Eight Days A Week.

One big plus: Hulu has a live-TV option so you can watch live broadcast networks.

One big minus: You’ll have to sit through ads — unless you pay for the commercial-free option.

If you’ve already paid for your Amazon Prime subscription that gives you free two-day shipping on purchases, then you’ve already got Amazon Prime Video. Similar to Netflix, the streaming service offers a huge range of TV shows, movies and original programming, including The Marvelous Mrs. Maisel.  Be sure to check out its catalog of HBO classics such as The Wire and The Sopranos.

Disney Plus: The “must-have” streaming service if you have small kids — or are a kid at heart

Disney Plus is quickly becoming a streaming staple for households with kids and superhero afficianadoes. The streaming service provides access to the complete catalogues of Disney (Frozen, Muana and every other Disney classic you’ve ever seen), Pixar (Toy Story movies), Marvel (Black Panther, Avengers) Star Wars and National Geographic. Looking to add more content? For $13 per month, you can bundle Disney Plus, Hulu and ESPN+.

Fubo: For the avid sports fan

Just want sports and news? Check out Fubo. For about $55 monthly, the service offers more than 100 channels in 4K, including a ton of niche sports channels and almost every cable and broadcast network you can think of — except for ABC and ESPN. Both of those are owned by Disney.

And you don’t have to commit right away to Fubo. Seven-day free trials are available.

Short on cash? Several streaming services are totally free. You won’t get access to the latest blockbuster or the hot new TV series. And you’ll have to put up ads. But that’s what makes these options possible.

One solid option is Sony’s Crackle. While the service offers limited TV shows, its catalogue of movies makes it worthwhile. Original programming is also part of the mix along with children’s shows.

Meanwhile, Peacock Free provides access to TV shows from USA, Syfy and NBC as well as movies from Universal and Dreamworks Animation. All you need is an email address and password to start watching immediately. And if you get hooked, Peacock offers paid packages too.

Your days of sitting in front of a spinning wheel and a frozen screen will soon be a thing of the past with high-speed internet from DayStarr. Sign up today and start building your perfect streaming setup.