Randy Conat from ABC 12 News (WJRT) visited us and talked with President Collin Rose to learn more about what it means for Owosso to be a gig city. Collin did a great job, of course, and so did our field crews who kept going despite having cameras on them! Here’s how it turned out.

High speed fiber optic is being installed in Owosso

The introduction of high-speed fiber infrastructure in Owosso that allows for speeds beyond 1000M – or 1G (one “gigabit”)—means Owosso is now considered a “gig city,” putting a small town on par with numerous other large cities around the country and increasing property values, attracting new businesses and adding one more incentive to keep younger entrepreneurs and workers in town.

DayStarr Communications started building a fiber optic network in Owosso on its own – unlike most other gig networks – more than three years ago. Construction continues on a neighborhood-by-neighborhood basis, with hopes of having the entire city finished within another two to three years. More than 2,000 homes already have access. Because of the cost of building fiber, it is unusual for companies the size of DayStarr to tackle this kind of project without loans, federal grants, etc., according to DayStarr President Collin Rose.

“The reason 1G Internet is not widely available today is because internet providers have to place new fiber optic lines on poles or underground as existing copper infrastructure that has powered the telephone and cable companies for years just isn’t sufficient. Building all new infrastructure is very expensive. We’ve received great cooperation from our local municipalities, but the installation process is time consuming. 1G is still a fairly new option, but demand is increasing every day,” Rose explains.

“The 250M our internet customers start with is fast enough for many users today, but we know the demand for speed is only going to increase. All of our existing infrastructure has been upgraded to support 1G, and the fiber optic infrastructure we are placing today will support the demands of the future, like 10G.”

The National League of Cities defines a gigabit city as one where residents and businesses have access to internet connections operating at ultra-robust speeds up to one gigabit per second, or greater in some places. Other gig cities include Chattanooga, Tenn., Seattle, Wash., Kansas City, Missouri and Austin, Tex.

“Owosso becoming a gig city is unique and valuable because of our small size,” explains Justin Horvath, CEO of the Shiawassee Economic Development Partnership. “Compared to places like Chattanooga and Austin, no one expects to find it here, and they certainly don’t expect it to have been built by a smaller local company like DayStarr. This kind of technology opens the door for a much longer list of companies to do business here, which translates into jobs and revenues that benefit our businesses and governmental units. It’s a big deal these days. Businesses look at things like technology infrastructure when deciding where to locate.”

The top three benefits of 1G internet are quick downloads, rare buffering during streaming and simultaneous usage of multiple devices (i.e. streaming on 10 devices at once without delay). Users also find better reliability compared to copper-based services that are impacted by changing weather conditions and aging infrastructure.

When it comes to the Internet, many of us don’t know much about how it works, we just know we need it, and we need it to be fast. It’s all about user experience,” Rose, who is shown below with a display of fiber optic strands, explains. “Whether you are a residential consumer or a business owner, much of your daily life depends on reliable intern 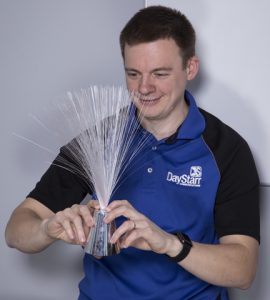 et. Maybe you are using it for e-mail, research, gaming, streaming music or watching videos, but no matter what, the faster the speed, the better.”

1G of fiber internet technically equals 1,000,000,000 bits per second. This is 100 times faster than the average Internet speed in the US. For example, says Rose, if you were to download a full-length high-definition movie (1.5 Gigabytes worth of data), you would be able to download it in less than 20 seconds if you had 1G internet. Depending on the speed, traditional cable internet download of the same movie would take three to five minutes or longer. On DSL it would take 10 to 20 minutes or longer, again depending on speed.

By looking at historical trends, Nielsen’s Law has determined bandwidth needs have doubled every 18 months. With the increasing popularity of services like SlingTV, Hulu, Netflix and Amazon Prime, users’ demand for bandwidth will make it difficult for legacy technology such as DSL to keep up. Luckily, 1G can, explains Rose.

DayStarr is confident 1G will have a positive and profitable impact on the Shiawassee region. It has already built fiber in other areas around the county. Economic development leaders like Horvath and Shiawassee Regional Chamber of Commerce CEO Jeff Deason see the opportunities this technology represents.

“It’s really affected how we think of ourselves as a region,” says Deason. “We’re a smaller-sized city in a rural area. Being ahead of the curve rather than at the end is a real achievement, and one we intend to capitalize on. One of the first ways we’ll do this is to offer the occupants of our new Armory Project DayStarr’s 10G service.”

“High-speed fiber throughout our community is a game-changer. It puts our downtown on the leading edge for both business and talent recruitment in our region,” adds Josh Adams, executive director of Owosso Main Street.

One local business owner, whose coffee shop has become a central gathering place, touts high-speed internet availability as a key attractor not only to his establishment, but to those looking to invest in the downtown. In his opinion, being intentional about connecting people is as important as the physical infrastructure of technology.

“We can handle up to 85 devices online at the same time thanks to DayStarr’s fiber. That’s amazing! It allows us to run our point-of-sale devices and internet radio without interruption. As a business owner, it’s one less thing I have to worry about, and it brings people in,” says Nick Pidek, owner of Foster’s Coffee. “Our Downtown Owosso Marketing Initiative, which is aimed at getting people to invest locally through their spending, residency and starting new businesses, will be successful in part because of DayStarr’s initiative. If we don’t have the infrastructure – which people are coming to expect – we are less attractive.

“But Community through Coffee is our mission. We’re about relationships. I see people in here from all walks of life studying, working, streaming and taking advantage of the fiber – building connections of some kind. That’s crucial to a healthy community. Being a gig city has a definite positive ripple effect.”